Rolling Stone (below) reported that Archangel was optioned as a movie, it hasn't; but it has been optioned as a TV series, which is awesome news, and the perfect medium for an adaption (time travel TV is very hot, with 11.22.63, Continuum, Outlander, etc): 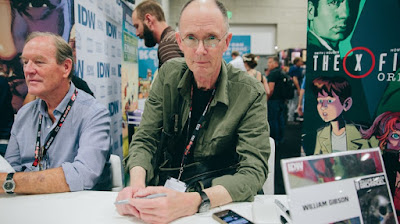 Technology is outpacing science fiction's ability to imagine the future, so that may explain why the godfather of cyberpunk William Gibson has turned to time travel, alternative histories, and UFOs in his first comic book, Archangel. In his first (long overdue) trip to Comic-Con, the author/icon accepted a lifetime achievement award and discussed the comic's plot: a race to keep alien technology in post-World War II Germany from falling into the hands of 'roided up future villains. Publisher IDW also dropped the atomic bombshell that a film is on the way — which makes sense, since Gibson's first draft was a screenplay.