A Major in the RAF during World War II, she works as an agent in the Intelligence Service. She reports to Air Commodore Gordon Tully. She also holds a PhD in Materials Science, and has a chemistry laboratory in her headquarters.

She also believes in the supernatural and is very interested in Foo Fighters and Scandinavian Ghost Rockets. She is also able to readily accept that there are travellers from the future visiting her time.

She was dating Vince Mathews for a while.

"Naomi" as a given name can be either of Hebrew or Japanese origin. "Givens" as a surname is either Irish or Scottish. 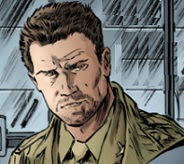 A captain in the US army during World War II, he works as an agent in the Intelligence Service. He is engaged to be married, but was also dating Naomi Givens.

He carries a Remington Derringer in an ankle-holster, and was trained by OSS Colonel Rex Applegate.

"Vincent" as a given name is of Roman origin. "Mathews" as a surname is either Scottish or English. 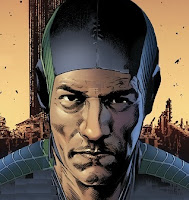 A Stealth Bomber pilot from "Nu 2016" who is part of a faction opposed to the Henderson's Archangel plans, and with the help of Major Torres he travels back in time to 1945 in his Stealth Bomber. In transitioning to the past, his aircraft collides with some B-17s, which kills his co-pilot, Carlos. He is captured and imprisoned by US Forces. He is in contact with Major Torres using robotic flies, and with her help manages to escape from his imprisonment.

The Pilot doesn't know anything about how the Creepsuit technology works, but seems to have a general idea of how time travel works. 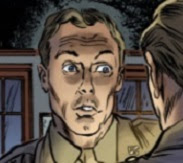 A Major in the US army during World War II, he serves in the Office of Strategic Services. He has at least one son, Robert, who will become President of the US. He has lung cancer and in the original timeline he died in 1946. In the revised timeline his grandson, Junior, garrotted him in 1945, and replaced him. 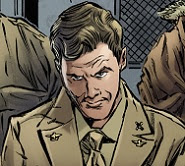 The son of Robert Henderson. He is the Vice President of the US in "Nu 2016". He gets plastic surgery to look like his grandfather, and then goes back in time to murder his grandfather and replace him as part of a nefarious plan with his father.

He is a bully who threatens both Naomi and Vince. 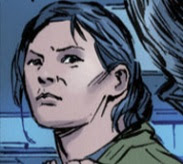 Major Torres is in the "Nu 2016" US Army, and works in the Splitter Control room. She disagrees with the Archangel plan and therefore lies about the radiation levels in "The Splitter" and after Junior Henderson goes back in time she takes control of The Splitter, and sends a Stealth Bomber with two pilots back in time to stop Junior.

She has an exceptionally strategic brain, she blows up the tunnels to the Splitter Control room to prevent people loyal to Junior from stopping her, as well as booby trapping the Splitter's power cables, sabotaging the excavators, and destroying the auxiliary Splitter control room in Omaha. She uses a wheelchair. 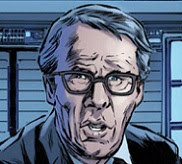 Dr. Davis is the inventor of "The Splitter", he is a genius physicist. When Junior Henderson uses the Splitter to travel back in time to 1945 to initiate the Archangel plan, Davis is in the present trapped with a splinter faction (led by Major Torres) who want to prevent the Archangel plan from succeeding. He seems to be naive about the Hendersons. 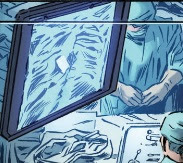 Co-pilot of the Stealth Bomber sent back in time by Major Torres to disrupt the Hendersons' Archangel plan. When his aircraft collides with some B-17s, he is killed. During his autopsy his Surgically Implanted Improvised Explosive Device (SIIED) explodes and blows the Coroner's thumb off. 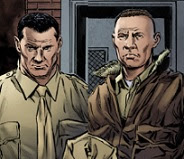 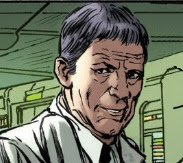 The plastic surgeon who transforms Junior into the image of his grandfather. 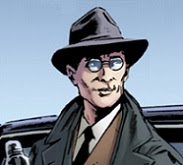 Fritz serves as Naomi's driver, and seems to have contacts in the black market, where he is able to obtain French coffee. He has a Ukrainian friend who keeps him up-to-date on the Russian quadrant. He was in a Nazi penal camp for homosexuality, but was treated better than some other prisoners. He may have stolen a lorry-load of copper. 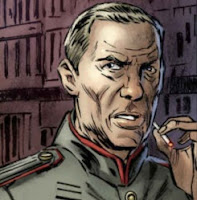 Colonel Yerakov might be the Chief Intelligence Officer in the Russian quadrant of Berlin. He has a Ukrainian informer. 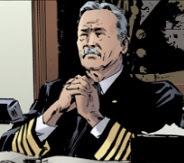 Air Commodore Tully is Naomi's boss, and has a senior role in British Intelligence. He is spying on his allies, and is aware of events in Naomi's personal life as well. 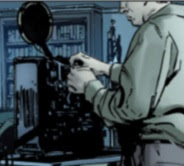 Derek appears to be Air Commodore Tully's adjutant (or aide-de-camp). 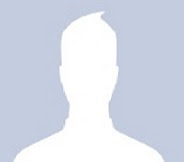 Vince claims he intends to break it off with his fiancée.