Page 22 sees THE PILOT, and he is in our present.

THE PILOT's grabs a newspaper blowing in the wind.

THE PILOT is in Germany.

The paper states - "TRUMP'S TRIUMPH" - The New York Times, The Economist, and NewStatesman had that as a headline.

This means THE PILOT is in our world, but our world is a product of the Splitter rather than the "right" history, William Gibson explained this in March 2016 in an interview with CBR:

"The Splitter splits timelines, creates forks in history, so it’s really a pretty standard sci-fi plot device. I think we’ve made interesting use of it, though, in part because our timeline here, today, turns out to be a product of the Splitter, and, for all our problems in our real 2016, we got really lucky compared to everyone in the original timeline, where they finally build the Splitter in an attempt to escape. That’s spoilerish, but I think it goes by so fast in the comic that a lot of people could miss it, so I don’t mind underlining it." 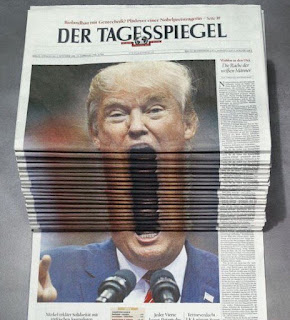 The outcome of the U.S. election was undecided when writing commenced on Archangel, so when asked how the end would have differed had Hillary Clinton won the election, William Gibson tweeted, "In the same place, but with the Pilot simply staring in wonder at the city"

THE PILOT is somewhere amongst us, keep an eye out for him, and be nice to him if you see him, he's going to have serious culture shock.