AGENT GIVENS has a PhD. In an interview with PREVIEWSworld William Gibson says Naomi is a "materials scientist".

Three-dimensional chess is not just something from "Star Trek", 3D chess variants have existed since the late 19th century, one of the oldest being Raumschach (German for "Space chess"), invented in 1907 by Dr. Ferdinand Maack. 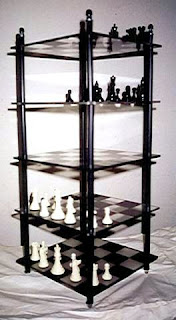 As an aside it is worth noting that there is a variant of 3D chess called Parallel Worlds Chess invented by R. Wayne Schmittberger in the 1980s.

FRITZ may have stolen a lorry-load of copper.

COLONEL YERMAKOV is in charge of the swarming.

FRITZ has a Ukrainian contact that works for COLONEL YERMAKOV.